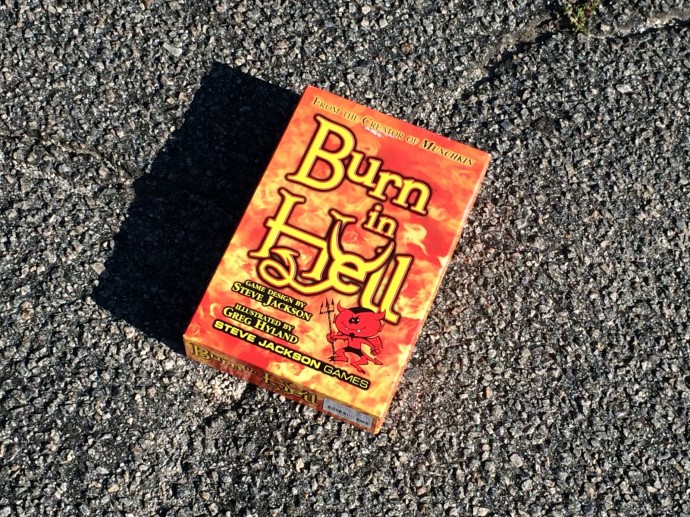 Before we begin, Skip-A-Turn would like to send it’s thanks to the Newbie Blogger Initiative, and would humbly like to accept it’s award of the Good Moniker Medal! Now, onto our regularly scheduled review!

It’s hot. It’s not just hot, it’s humid. The vinyl seats of your car stick to you, you’re at your driest when you’re in the shower, and did we mention it’s hot? Because we’re not completely sure we’re being as clear as we could be right now: It’s like you’re living in a constant sauna that’s on full blast next to Pompeii as it goes kablooie. Every so often some putz will try to tell you to think of some place colder, as if thinking of the melting ice caps will make you feel less like you’re roasting at two fifty! No, we’re going the opposite route. Way opposite. We’re going to the hottest thing in existence! This is Burn in Hell.

First off, we apologize if this review is more ornery than usual. It’s Skip-A-Turn’s last summer in the South, and while part of us will miss our musty and dusty and historical little town, we’re not going to miss the heat. You know what it’s like, right? You just get so hot, and then you run out of your Lemonade Popsicles and of course with all the storms going on your power freaks out and it’s almost impossible to find time to sit your butt down and work on a darn review and then we have that whole thing with the weather man saying “Oh it’s only 15% chance of rain today” so you wear your nice new sneakers and– *insert incoherent rant here*

Sorry. Sorry. We are so sorry. This is what happens after prolonged Munchkin exposure and the summer months on our poor little brains.Thankfully, we have a fantastic game to work out all this frustration and aggression with: the blasphemous card game Burn In Hell.

In this game, you gather famous (and infamous) people of various time periods, from the mostly benign people in pop culture (the genuinely likeable to the decidedly obnoxious are both included) to some of the greatest ass-holes in world history.

Hitler is an ass-hole. There. We said it.

The game starts off with Hell at a startling 100 degrees Celsius, or about how hot is in in Georgia right before another damn storm hits. Each time you throw people into the bits of hell, you lower the temperature just a little bit. When Hell freezes over, or you somehow manage to run out of cards (seeing as how the box lives up to Steve Jackson Games tradition of giving you a butt-ton of cards, that’s not likely) the game ends. Whoever has the highest number of souls at the end of the game, wins! It’s like being a Church missionary, only in reverse. 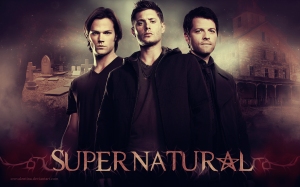 That’s pretty much the plot of this show, right?

Scoring is pretty simple. After you draw your three cards and throw one into the pit (which is more like purgatory, as others can steal from it) you can then declare a circle, and take four (or more) cards with the same sin and make a stack. You get more points if you get one of each sin (Wrath, Gluttony, Pride, Envy, Lust, Sloth, and Avarice) and throw those people in a special circle. Al Capone, John Wilkes Booth, Henry VIII, and Atilla the Hun will have a swimming time, we promise.

This game is a step up from Munchkin, and in a more fair world it would probably be more popular too. It’s a good bit easier to understand, it’s more overtly funny, and it’s kinda educational! As the cards don’t have to be secret, the back of each card has the character’s biography on it, giving context to their crimes against humanity. It’s questionable and there seems to be a bit of reaching (really, Marilyn Monroe wasn’t THAT bad of a person) but it can be used for some history lessons ala Timeline.

The only thing this game needs to go to confessional for? These cards are cheap. In the “I think I might accidentally tear this” kind of way. We realize this was done to make sure you get about a hundred thousand cards in one box and keep the price down, and while it’s fun to have thousands of people to throw into the firey pits of Hades’ furnace, you’ll just kind of wish that they looked a wee bit nicer.

This isn’t really a sinful game. In fact it’s kinda charming, with some solid artwork and a rule set that has you up and ready to play in about 10 minutes or so. Hell (pun intended), it’s also one of those rare games where you can fiddle with the rules a bit to make games shorter, and we always like the option for a short game! So for that, we have to say: Stay inside, turn the fans up, and go to Hell in a hand basket!

Buy Burn In Hell
Price: $19.99
Players: 2 – 5
Recommended: 3-4
Skip-A-Turn Variation: The Seven Demons: Every one pick one of the Patron Demons of Hell. Get a +1 every time you send a group to that circle of hell. Then go to Church, ya heathen.

One thought on “Burn In Hell Review”