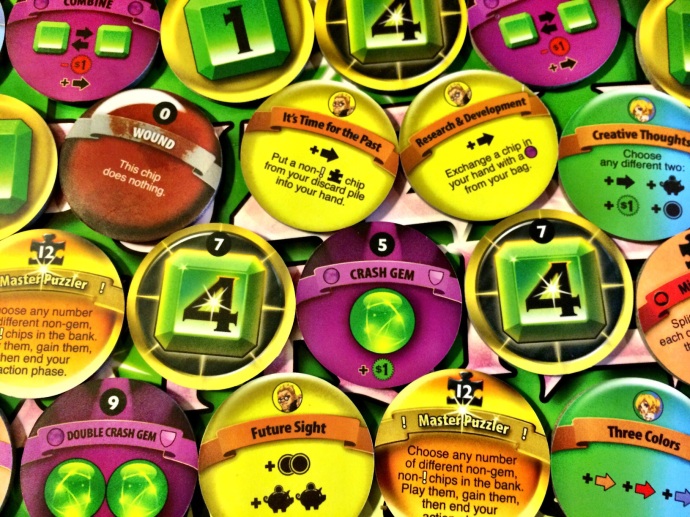 You and your opponent stand eye to eye. You’ve fought long and hard to be here, and victory is almost in your grasp. You have to be as quick as the coursing river, have the strength of a great typhoon… All in order to make sure that your opponent’s personal game of Tetris is ruined. Yeah. This game is weird.

So Puzzle Strike: Bag of Chips is a Deck Building game published by Sirlin Games that tries to emulate this:

Brace yourself: This games an odd duck.

Puzzle Strike was developed by David Sirlin, and features some adorable art from Long Vo. First released in 2010, in 2012 a Kickstarter was performed in order to bring a new version of this conceptually odd Deck Builder to life.

Now Deck Building Games are an interesting creature: It brings the stability of a “bank” of cards (similar to having a deck of 52 cards in a game of Go Fish) with the versatility and strategic organizing of a Trading Card Game such as Magic. While all Deck Building Games, or simply Deckbuilders, are different, the average flow works as such: Each player begins with the same “deck” at the beginning of the game. When it comes to their turn, they play their cards, and the end of their turn, the player then purchases new cards for their deck using in-game currency.

Puzzle Strike is not all that different from the above example: You select  your  character’s deck of three character cards,  six 1 Gems (which act as currency and weapons in Puzzle Strike), and a Crash Gem (which is how to hurt your opponent and keep your play area nice and clean). The twist? They’re not cards. They’re small cardboard discs.

Pogs: Something I will never understand about the 90s

Alright, that’s hardly fair. They’re not Pogs. The Bag of Chips subtitle exists because the deck building aspects eschews cards and instead uses the titular chips. They’re cardboard, yes, but they’re incredibly sturdy well-made pieces of rounded cardboard. They have a great weight, and they make shuffling a blast. No, that’s not a joke: Shuffling is great fun in this game! In order to shuffle your deck, you put all your chips in a nice velvet-ish bag (which come included) and give it a nice, good shake. You might feel like an easily amused 6 year old, but it’s just oodles of fun. Yes. Oodles

Each turn you get a 1 Gem thrown into your play area by the bank, simulating a gem falling from the top of the screen: This goes to your Play Area. You have to combine it with other chips in the Play Area and crash it, sending it to your opponent! Or, maybe you play a Move Chip, giving you extra moves and bonuses or sending nasty Wounds to your opponent! After that excitement, you get to use the Gems in your possession to purchase new chips, and the game continues until someone ends up with more than 10 Gems in their Play Area. This game gets frantic, with chips flying all over the place and people pulling off impressive combos and just… This game is a fun, panicked romp.

Each game in the series (Puzzle Fighter and the 2012 expansion Shadows) is terribly, terribly, TERRIBLY unbalanced. Some characters are just designed to win more! And I don’t know if I even hate that, because it’s based on a fighting video game (well, puzzle fighting game but whatever…), the most notoriously lop-sided genre on the planet. It’s a rare time where the ideology that mechanics and themeatics should work in tandem is genuinely questioned, and as a gamer I find it hard to know if I love that or not.

Regardless, I will never poo-poo a game that just tries something different and funky. And this game is, indeed, different and funky. And when you get the game running, it has moments of brilliance that I have to cheer! Along with the cute but stylish art and well-made pieces and playmats and borders, it’s exceptionally easy to encourage others to give this one a shot! Just be prepared for some harsh words when certain characters are picked.

Buy Puzzle Strike: Bag of Chips
Price: $9.99 for Print and Play – $59.99 for a Physical Copy
Players: 2-4
Recommended: 2
Skip-A-Turn Variation: HADOKEN!: The winner gets to act out a “Final Move” as seen in Street Fighter or Tekken. No matter how silly, the loser has to play along.