Welcome to the big finale of the big three! And it’s going to be big! So big! We have monster trucks! A musical number by Cher! A crepes station! Fireworks! And… Wait, I’ve been informed we don’t have any of those things. But we do have a good game! That has to count for something, right? Right?

Well, that’s a bummer. I was really in the mood for a crepe. But no matter, because today we’re finally going to talk about something that wasn’t background radiation, but a pure nuclear explosion of my childhood!

Yes. Pokémon. Hitting the shores of the United States in 1998, this cockfighting simulator was my drug of choice in my formative years, and has managed to release about 19-odd games since it’s introduction in Japan in 1996 (This is counting all the spin-off games where you get to watch television with Pokémon or take photos of Pokémon or play Tetris with Pokémon…)

Now, the Pokémon Trading Card Game made it’s debut in 1996, around the same time as the first game was released to the public. It would be released stateside in 1999, and I’ll air on the side of safe and say that it was a “hit”… And lo, it would introduce the object of desire for every card-buying child across the nation. The sparkling gem of existence: The Holographic First Edition Charizard. 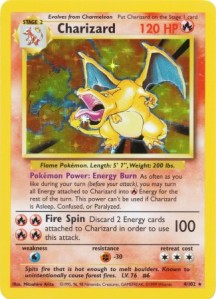 Beware the false messiah, for it is not of the first edition!

So, obviously, as a grown man, I would have broken out a deck, played game, had some fond memories, and would report that while it holds a near and dear place in my heart that this game is just as nonsensical as Yu-Gi-Oh or as unbalanced as Magic the Gathering, correct?

This game is awesome.

As I say this, I have to clarify: It’s not awesome for a game based around Pokémon. It’s not awesome as a children’s card game. It’s not awesome because I’m a man-child who refuses to let go of the past. No, this is an objectively well-crafted, smartly made, colorful, and intuitive game. It is almost every thing I would want in a card game. It’s strategic while being balanced, it’s fun while not being a slog, and it has win conditions that are more than “You’re not dead here’s a cookie”

Now, I know you’re probably rolling your eyes at this. I would as well. However, I never actually played this game as a child! No, seriously, not once! I was far too busy playing the video game, collecting the cards, and making sacrifices in cult-like robes to get that First Edition Holographic Charizard. What? You didn’t? Weirdo.

I played this within a week of playing Yu-Gi-Oh for the first time and I can safely say that this game is just… Good!

Each player has a deck of 60 cards that consist of Trainer Cards, which are items and people who make your game easier, Energy cards, which give your Pokémon the energy to do their fighting, and finally Pokémon cards.

Both players set up six face-down cards called “Prizes”, which you get to draw when you knock out the other player’s Pokémon. Then each player draws seven hands and can put Pokémon onto their bench, with a maximum of six Pokémon: One in battle and five on the bench. You then proceed to give them Energy and play Trainer cards, and you end your turn when your Pokémon in battle attacks.

This is one of the first things that made me enjoy this game: It’s THAT simple to understand. You play the monsters, the monsters attack, and the game continues. The strategy comes in the monsters themselves: Strengths and weaknesses that can be understood at a glance! No muddling around with names and strange alien logic: Blue (Water) beats Red (Fire), who in turn beats Green (Grass), and so on and so on. An extravagant version of Rock Paper Scissors? Yes. And it’s lovely.

One can also assume that “flipping the table and walking away” will also get you a win, but that’s debatable.

Why people love these games!

So many paper-cuts, confused glances at a rule book, beautiful and not so beautiful art, questions and declarations of shenanigans have lead to an understanding: The reason these games matter.

They don’t just matter because of how big they are. What matters is the communities they build around them: The cultures, the jokes, the characters mean so much to the people who really love these games. They seem like such trivial affairs to an outside eye, but when you’re entrenched it’s really interesting to experience. I even see merit in the much mocked Yu-Gi-Oh because of this.

Thank you for joining me as I delved head first into these three über-popular card games! Now, if you’ll excuse me, I have a game to finish. Those cards aren’t going to shuffle themselves!

One thought on “Card Games: The Big Three Part Three”