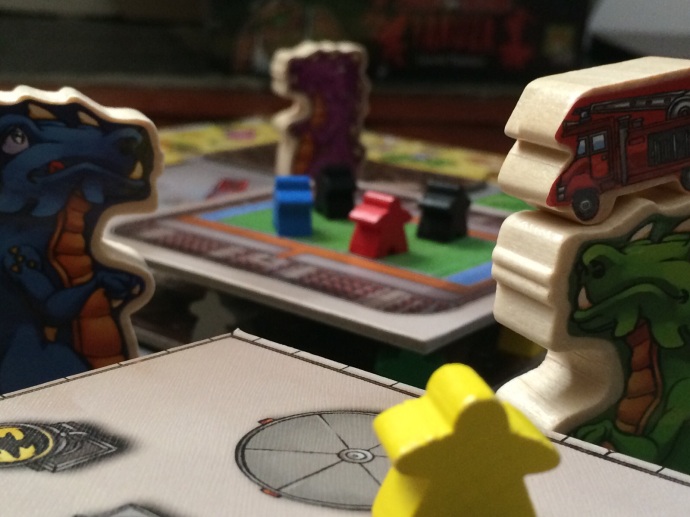 RAAAWWRRR! SKRONK! SMASH! DESTROY!  You don’t know true horror until your house is falling apart, cars are being thrown like child playthings, and the world you once knew is being destroyed by horrific monsters from beyond the stars! Or maybe they’re from beneath the waves. Nuclear explosions? Lab testing? Eh, whatever, giant monsters and destruction! Run for you life! This is Rampage!

Rampage  is designed by Antoine Bauza and Ludovic Maublanc, two French game designers known for their insanely successful games 7 Wonders and Cash and Guns, two games that are just… Really really really BIG in the board-game world. So, they teamed up with the artist Piero, and created what might be the most American board game the world has ever seen.

What’s an American board game, you’re probably asking? Well, looking at Skip-A-Turn’s reviewing mentors/idols/oh-I-hope-Senpai-notices-me-today Shut Up & Sit Down review of Fortune and Glory, an American board game is one that is big and loud and colorful and all about theme and how cool it is and is just filled to the brim with stuff! Because small,  little board games that are mostly there for mechanics are the “Before” images on those photos you see selling muscle enhancers.

Pretty much this, yes.

Okay, that’s hyperbole, but American Board Games are extensively… Big. And this game is huge! Cardboard and stickers and glue and Meeples! So many Meeples! And it’s so pretty! All of it is colorful and vibrant and interesting and looks like a Saturday Morning cartoon set up on your game table! And then you play it, and you finally understand what this game is at it’s core: This is a 5 Year Old Boy Playing Godzilla Simulator.

Shown: You When You Play Rampage

Now, the board itself is a bit of a character because of just how interesting the setup for this game is. You use Meeples, which are small people-shaped pieces, and you sandwich them between sturdy cardboard pieces in order to build the city for your character to destroy. This lets the game be a bit different each time it’s played: Do you want one GIANT tower and a few small ones? Perhaps make them all equal like a dinosaur city communist? Well, whatever you decide, don’t get attached, because it’s going down!

This isn’t to say that Rampage is a game lacking any sort of finesse or skill. Despite how American it looks, it’s still a French game at heart. Unlike other board games that require your mental fortitude and luck in order for you to win, Rampage is a dexterity based board game. Each player picks their monster (Red, Pink, Blue, and Green) and starts at a corner of the board.

You then proceed to flick the paws of your monster (a small wooden disk) around the game board in order to make your monster move across the board. That’s where the dexterity part comes from, you see. You then proceed to throw cars (which are small wooden ones that you flick off the top of your monster), crush buildings (picking up your monster and dropping it on the buildings)  and spray radioactive flamebreath (which is you balancing your chin on a monster and… blowing really hard). You then proceed to eat as many poor Meeples as you can, while praying you don’t send them out of the city limits to safety, because then they’ll regroup and strike back! With bad things! That hurt your poor, innocent monster!

Don’t let this be your monster!

The game also has a “power” mechanic and a “personality” mechanic through a deck of cards, which are drawn at the beginning of the game, which allows another level of customization to each game of Rampage, so just in case you were afraid that this city destruction simulator might get repetitive.

In short, Rampage is a big silly game that inspires some big, silly fun. Some might find it too silly and some might find setting up the city for destruction a bit tedious, but it’s hard to get mad of this giant cheerful puppy of a board game. Some elements, such as the victory point system being a bit nutty and the abilities being somewhat vague, are barely noticeable flaws in a game where things are flying and the table is just so bemused. A must-own for family game lovers out there!