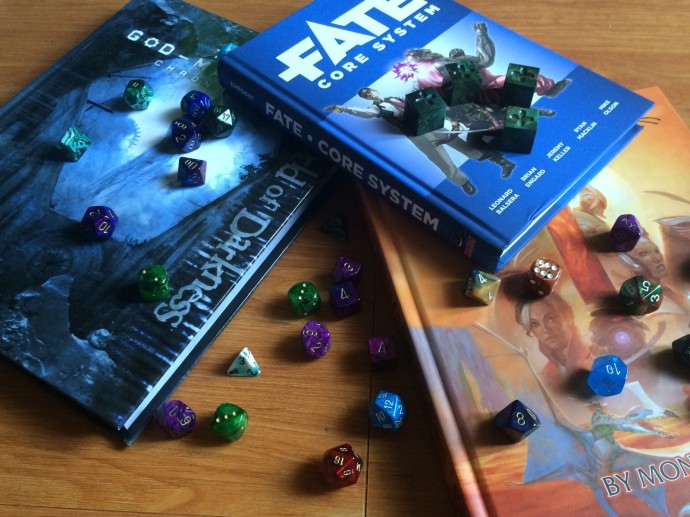 So. Role Playing Games. I’d put their public image somewhere between foot fungus and that guy on airplanes who feels like he’s earned your leg-space. They’re known as the domain of the dork, the netherworld of the nerd, the national pass-time of the neckbearded and the maladjusted. And when I suggest people try them, their first reaction is a resounding  “No!” Now, I’ve been an avid gamer of the non-video game variety for a little over six years now, and I’d like to… Dismantle a few stereotypes about the games of the role-playing variety.

I’m taking the easy route first. If you’ve read our handy-dandy About page, you know that the real reason we love board games is that they’re a social experience. There’s no separation via screen, you don’t need to buy the console and the game and the extra controllers and then the Internet connection service because the free one never works right and all the games that hype multiplayer seem to be terrified of people sitting on couches with friends and grumble grumble GET OFF MY LAWN.

Where was I? Oh, yes. They’re social! You have your friends and you’re talking and laughing and all you need are dice and a piece of paper! That’s it! Which leads us to #2!

One of my favorite RPG systems is EvilHat Production’s FATE. It’s a “Generic Universe” system that lets you modify it to fit any setting. Kung Fu Gorillas? Sure. 1920s Hard Boiled Detectives? Why not. Sailor Moon? Totally! All for the low price of whatever you want it to be.

Plus (and this time avoiding apt video game comparisons, promise) you only need to buy one book. Once. If there’s a game that you and your friends are DYING to play? Well, after you buy it you’re about 90% ready to play. One book to be shared among you guys and you’re ready to roll. The other 10% being pencils and dice which you can also share! And sharing is great! We love to share!

I take it back I take it all back just get it off my screen!

3. They’re Moddable
Lets say you want a game that is high-fantasy, that’s like Game of Thrones meets Addam’s Family and features a race of God-beings that are all purple. Well, first off, you have weird taste. Secondly, that’s totally doable.

Something like this I assume!…We’re on a bit of a purple binge today, aren’t we?

See, here’s something you learn really quick about RPGs: They’re about as customizable as you need them to be. Some of them are better for modding than others, but it’s not hard to make any game into whatever you want it to be, and just use the rules in the system presented to you. I once had a friend take Mage: The Ascencion, a game about being able to alter reality to your whim, and turned it into a game about Super Heroes and government censorship.

What if you’re not into that? Well, there are hundreds and thousands of RPGs on the market for you to play with straight out of the book! Mutants & Masterminds for superheroes, Changeling the Dreaming for modern fairy-tales that play like a Neil Gaiman story, Firefly for all your space-cowboy needs!

2. They Tell Good Stories
Despite our (read: My) constant complaining about video games, we (read: I) genuinely love them. Interactive media is awesome in all forms, really, and video games are a great way to interact with a story, since they allow you a good bit of narrative freedom. Some games are better at narrative freedom than others, like Skyrim, and some games just have brilliant and clever stories with wonderful, memorable characters.

Cake, and grief counseling, will be available at the conclusion of the post.

Table-top RPGs, though, let you completely create the story from scratch. Since the narrator is able to change the story on the fly, you can start off with a happy go lucky tale about five fantasy creatures out to score some cash and end up with a story of five near-deities killing the God of Evil with a duffle bag of pain. The narration  can completely change, as there is very little pre-scripted ideas within the books. You also create some of the most clever, dynamic characters available. You’ll be surprised just how creative you really are, when you get into it.

1. They’re all about you.
Pretending to be someone else can help you understand the people in your life better. And that’s what RPGs do: Let you be someone else. They give  you an outlet to understand, to feel, to explore. I’ve had friends use characters to deal with personal issues and aspirations in a safe, encouraging environment around friends. You might be pretending to be some one else, but you’re still you, and you’re still learning.

She won’t leave after last week’s review. Or Ru-View.

As much as Games are about playing and winning, they’re not always about you like RPGs are. In Role Playing Games  it’s your story and your character. People get attached the fictional lands they explore, and the fictional relationships they build, because they are your worlds and characters and relationships. It’s all about you. It’s a simple reason, but it’s a solid one: You should try RPGs because they’re all about you. And really, what’s a better reason than that?